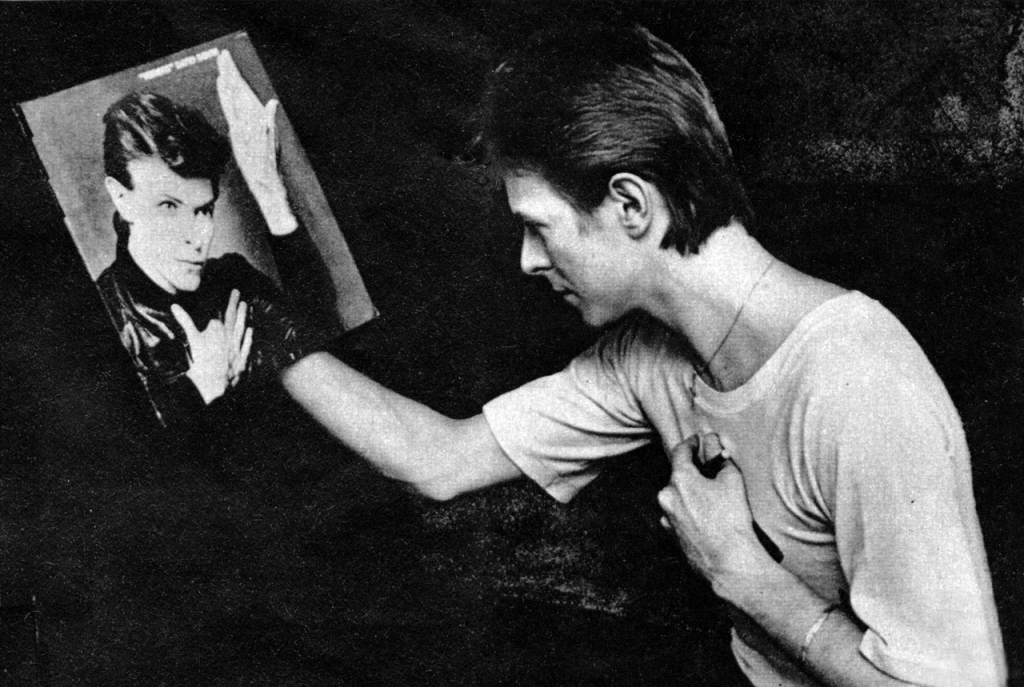 The idea of dividing an artist into periods or eras is a very seductive one – preferring the ‘fusion years’ of Miles Davis over the ‘cool jazz’ of his beginnings, or Frank Zappa’s musique concrete over his more obscenity-riddled pop tunes in his later years. Although this is certainly a legitimate distinction in both examples given above, it is regardless something applied to the artist retrospectively. It’s fairly rare we ever hear the artist talking about their work in such strict, easily distinguished partitions. All the works bleed together; something that arose in one earlier piece of writing or music flourishes in the next and becomes the focus – the creation of a piece of art is far more complex and organic than these simple labels suggest.

Yet what about when these labels are applied by the artist? On the release of 1979’s Lodger, David Bowie announces this album to be the third part of a ‘triptych’ alongside 1977’s Low and “Heroes”. Brian Eno – Bowie’s musical collaborator over all three of these albums – also starts to refer these albums as a trilogy. The Berlin Triptych is born.

Just by calling these albums a collective whole, it definitively changes our experience of them as listeners. A trilogy perhaps even more so. We expect the first part (in this case, Low) to introduce us to ideas that will carry throughout the works, the second part (“Heroes”) to expand and experiment with these ideas, and the third (Lodger) to hark back to the original as well as providing us a sense of closure. A beginning, a middle and an end.

I also tend to be more forgiving of ambitious, lengthy works, provided the pay-off is there. A few sub-par scenes in a film, a few uninteresting tracks on an album and a few draining chapters of a book can all be forgiven with the knowledge of the overall beauty and success of the larger body of work. I succumb to these same trappings, treating Low, “Heroes” and Lodger as parts of a greater, Germanic and Eno-driven whole, with Station to Station being the transitionary album to get to this point, and Scary Monsters the break away into different territory. But should I? In fact, this rather excellent review of Lodger by The Quietus says we can only really appreciate the album when treated on its own terms, separate from its brothers.

This triptychising all appears to be some publicity stunt, some artificial attempt to force meaning onto a series of albums which, although they are certainly not without their through lines, are not altogether linked. Low and “Heroes” both share the same structure – the first side is made up of songs, the second side is (mainly) instrumental tracks. The general coldness of these latter instrumental pieces in particular is what lends to these albums’ introspective feel, whereas Lodger is comprised of ten pop songs –albeit quite experimental ones. Lodger itself was recorded in Switzerland, again suggesting the culture of Berlin that permeates the first two albums does not apply in its third incarnation – the influence of world music on tracks like “Yassassin (Turkish For: Long Live)” and “African Night Flight” just exemplifies this distance [1]; although “Heroes”’s closer “The Secret Life of Arabia” certainly showed Bowie dangling his feet in Lodger territory. So calling these albums a Berlin triptych is a misnomer. ‘The Bowie & Eno Years’ is a lot more accurate as a title and allows for the shifts in sound and experimentation that the Berlin triptych does not. Low and “Heroes” certainly make quite the Berlin Diptych, however. Track names like “Weeping Wall”, “V-2 Schneider” and “Neuköln” seem directly linked to the Berlin and German experience and Bowie’s time recording in the Hansa Studio. Even the origin of Bowie’s most famous work from this period – the lyrics for “Heroes” – famously came about by Bowie seeing two lovers kissing under the shadow of the Berlin Wall.

Lodger seems to have nothing to do with this whatsoever, but certainly does takes other ideas from these albums and further them. Brian Eno’s infamous use of Oblique Strategies – cards that he would hand out to musicians with suggestions such as ‘play something boring’ or ‘make everything as similar as possible’ – are used to an extreme here. Two tracks on the album, “Fantastic Voyage” and “Boys Keep Swinging” use the exact same chord progression – and on the latter, Eno had the musicians swap instruments! These strategies, along with Bowie’s enthusiasm for the ‘cut-up’ technique of lyric writing (made famous by beat poet William S. Burroughs) are a constant theme throughout the three albums [2].

When looked at through the lens of a trilogy, it’s no surprise Lodger gets the bad wrap it did. Low and “Heroes” are two albums linked by time, similar experiences and musical structure. Not to retread too much of that Quietus review, but when Lodger is forced into triptych status, it comes off for the worse.

These divisions into eras we make in artists with an extended back catalogue can be somewhat helpful to newcomers, giving them an accessible point of entry into what can seem an impregnable discography. But perhaps these broad strokes are best applied only after the fact. Eras and periods after all can only be really be fully determined retrospectively (fully being the clarifying word – we may know or hear of people ‘entering a new era’, but we never really know when the era ends until it has.) And this is possibly all Bowie meant by making this a triptych. Scary Monsters, released in 1980 (a year after Lodger), showed Bowie changing his sound yet again and walking into the 80s with one of his best tracks, “Ashes to Ashes”. The album clearly marks the beginning of a new era for Bowie; perhaps he felt the need to formally close off the previous one in order to continue further. It’s something I can appreciate aesthetically, but artificially creating this triptych effects the albums negatively. The Berlin Triptych gets seen as two thirds successful, and Lodger is left to be practically completely ignored. It’s a shame, but perhaps Bowie felt he needed to take down the wall he had built for himself so he could start again.

[1] That’s not to say these tracks are completely detached from Germany – “Yassassin” was influenced by the Turkish population in Neukölln. “African Night Flight” came about when Bowie met some German WWII veterans in Mombasa in the late 70s.
[2] For a nice insight into what Bowie was trying to do, listen to this interview from BBC radio in 1977