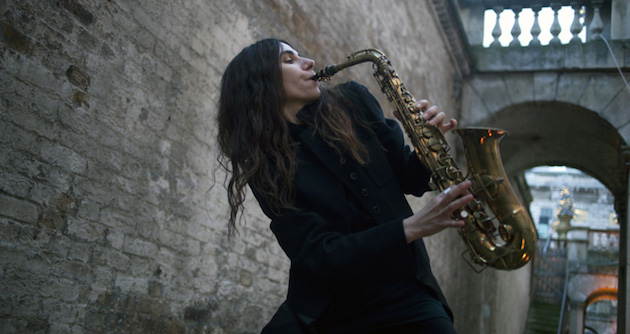 PJ Harvey’s The Hope Six Demolition Project at first appears to be the distant and colder cousin of 2011’s anti-war masterpiece Let England Shake. Despite this initial impression, a deeper examination of Harvey’s motivations and approach – along with a comparison of her previous record – reveals more going on under the surface.

Early responses to Hope Six’s opener ‘Community of Hope’ found Harvey being heavily criticised for its lyrical content. The Washington D.C. community outreach organisation that the song is named after took umbrage with Harvey’s words, from its description of the Ward 7 district as “drug town”, with a school that “looks like a shit-hole”. These lyrics come from notes Harvey took whilst being driven around by a journalist, and without the line “At least, that’s what I’m told” near the start of the song one could easily confuse these statements for those of Harvey’s own. At the same time, given the level of research that Harvey has spoken of doing while preparing Let England Shake, there is certainly some validity to criticising lyrics that seem to have been based solely on second-hand information doled out from within the confines of a vehicle. After Let England Shake’s compassion for those lost in war, this apparent neglect and condescension for those struggling in poverty doesn’t sit right. Imagine if directly after 1983’s War, U2’s Bono started preaching about capitalism saving people’s lives (well, he did do that. but only many years later). But at the very least, it’s worth examining what exactly the point of telling the piece from such a detached viewpoint could be.

Perhaps the subtlety with which Harvey deploys her irony is the cause of the controversy surrounding ‘The Community of Hope’. Yet “being too clever for one’s good” – particularly in art – is never an argument that I would say holds much weight. It simply means that the work requires more than a cursory glance. It’s also not as if Let England Shake was devoid of similar techniques, yet that record was widely praised.

Take me back to beautiful England

And the grey, damp filthiness

Of ages and battered books

And fog rolling down behind the mountains

On the graveyards and dead sea-captains.

Let me walk through the stinking alleys

To the music of drunken beatings

Hastily sold for nothing, nothing.

Let me watch night fall on the river

The moon rise up and turn to silver

The sky move, the ocean shimmer

With ‘The Last Living Rose’, no-one is accusing Harvey of being some nationalistic xenophobe for those first few lines. Her employment of irony allows for two streams to run through the piece simultaneously. On one level, there appears to be a love and appreciation for the history and community that comprises much of Englishness, while on another level Harvey criticizes concepts of English identity that have sunk so low they begin to stink. With the subsequent track ‘The Glorious Land’ we find further, if more heavy-handed irony:

How is our glorious country ploughed?

Not by iron ploughs

How is our glorious country ploughed?

Not by iron ploughs

Our land is ploughed by tanks and feet

Our land is ploughed by tanks and feet

What is the glorious fruit of our land?

Its fruit is deformed children

What is the glorious fruit of our land?

Its fruit is orphaned children.

Here there is no confusion with Harvey’s stance. The ironic lines are backed up with words that are also impassioned and emotive in order to carry her point across. Throughout The Hope Six Demolition Project however, irony is instead detached from almost all emotion. The latest album’s material arose from Harvey and war photographer Seamus Murphy’s travels to Afghanistan, Kosovo and Washington D.C., and Harvey’s lyrical approach is noticeably journalistic. With that comes a level of cold objectivity that can veil the moments of irony, or feeling. Interestingly, it’s exactly this use of cold, factual empiricism that creates some of Hope Six’s greatest moments. ‘The Ministry of Defence’, backed by a powerful staccato riff, depicts an Afghanistan ruined by war simply by listing the objects and sights seen while travelling through. Facts are not without their own emotional strength, and Harvey relies on this for a large portion of the album. ‘A Line of Keys’ talks of  “a displaced family eating a cold horse’s hoof”; ‘Chain of Keys’ describes a Kosovar woman walking through a decrepit town, the houses empty but the woman holding onto the keys for them in case the (presumably dead) owners ever return. ‘Near the Memorials to Vietnam and Lincoln’, “a boy throws out his hands as if to feed the starlings, but really he throws nothing.” – an act Pitchfork described as one of “the more literal portrayals of salvation denied elsewhere on the record”.

The Hope Six Demolition Project focuses on the forgotten, the downtrodden and those isolated by society. As an analogue, the level of journalistic detachment seems only too appropriate. However, it’s when Harvey combines her objective affectations with Let England Shake’s humanism that we find the album’s best track.

A revolving wheel of metal chairs

A blind man sings in Arabic

Lost upon a revolving wheel

Now you see them, now you don’t

Now you see them, now you don’t

All that’s left after a year

A faded face, the trace of an ear

A tableau of the missing

Tied to the government building

Faded with the roses

Lost upon a revolving wheel

All that’s left after a year

A faded face, the trace of an ear

And watch them fade out…

‘The Wheel’ from The Hope Six Demolition Project

‘The Wheel’ takes the sight of a carousel as the launching off point for a rumination on the Kosovo war and those who have disappeared. ‘The Wheel’ blends facts and numbers – whatever event the recurring “I heard it was 28,000” refers to (there’s no consensus), it cannot be good – with passion and defiance. The epic coda seems to challenge and dare listeners to try and not care about this loss of life, and carries with it an understanding that if these events are not focused or reported on, they may indeed fade into nothing. The defence of children dead and those not-yet born also brings to mind those from Let England Shake’s ‘The Glorious Land’.

Listening to Hope Six in its entirety, the lyrical perspective becomes clearer, particularly with regards to the opening track. The outrage directed at ‘The Community of Hope’ began when it was released as a single, and these songs (although not as much as those of Let England Shake) only truly make sense when taken in as a whole. It becomes clearer that Harvey is attempting to apply no judgement to the situation people are in. She hears a place described as a “shit-hole” full of “zombies”, and she notes it down. Whether that is good enough is certainly a valid question to pose, however.

The world of The Hope Six Demolition Project is a cold and detached one, and ironically (of course it’s ironic) one that offers little to no hope. Yet clearly Harvey dislikes this, feeling both an obligation to care for others (otherwise the record wouldn’t exist), but also at a loss as to what can be done. This friction culminates in a moment of emotional revelation during the album’s final track, ‘Dollar Dollar’:

The boy stares through the glass

Three lines of traffic past

We’re trapped inside our car

I turn to you to ask

For something we could offer

Three lines of traffic past

We pull away so fast

All my words get swallowed

In the rear view glass

A face pock-marked and hollow

I can’t look through or past

A face pock-marked and hollow

Staring from the glass.

It’s a heartbreaking, ambiguous end to the record that leaves the listener with no clear answers. As a protest record, Let England Shake was anti-imperialist, anti-war and left listeners empowered by its humanist perspective. With its focus on the oppressed, The Hope Six Demolition Project certainly shares that perspective, but is more a political record than a protest record, and leaves things in a state of unsettling uncertainty. What is one to do in the face of such a fatalistic reality? Cornel West gives the best response: “Those of us who truly hope make despair a constant companion whom we outwrestle every day owing to our commitment to justice, love, & hope.”