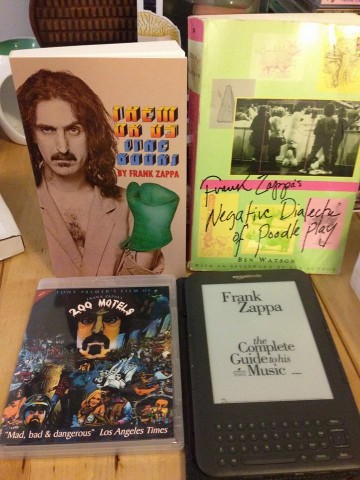 No, all is not lost, In Disciplined still exists. The Project/Object I’m next working on is just taking…well it’s taking over my entire life. I cannot even escape the title of this update![1]

I’m currently attempting to map out the conceptual continuity of Frank Zappa’s work, focusing just on the music and lyrics (i.e. not liner notes or artwork, which would expand my job tenfold). What is conceptual continuity? I will most likely elaborate far more in the article itself, but just so you have some idea why don’t I hand you over to Frank Zappa himself:

“Project/Object is a term I have used to describe the overall concept of my work in various mediums. Each project (in whatever realm), or interview connected to it, is part of a larger object, for which there is no ‘technical name.’

Think of the connecting material in the Project/Object this way: A novelist invents a character. If the character is a good one, he takes on a life of his own. Why should he get to go to only one party? He could pop up anytime in a future novel.”

“…In the case of the Project/Object, you may find a little poodle over here, a little blow job over there, etc., etc. I am not obsessed by poodles or blow jobs, however; these words (and others of equal insignificance), along with pictorial images and melodic themes, recur throughout the albums, interviews, films, videos (and this book) for no other reason than to unify the ‘collection.’”

I’m also only listening to the 62-ish albums released when he was alive, although I am including Läther (which was compiled by Zappa as a 5 disc monster only to be rejected by Warner Bros.) and Civilization Phaze III (one of the last works Frank completed, but hadn’t released before his death). I’m a good chunk of the way there with 49 albums considered, but there’s still a ways to go!

In betwixt all of this, Montresor’s second album is on its way! I’ve just received the physical albums and they are looking splendid. I am currently auditioning drummers in order to get a few shows organised, ideally with a nice big album launch before I send this album off into the world.

I am also planning to partake in February Album Writing Month (or FAWM). I’ve done this I believe a total of 3 times in 5 years or so, and it’s always been a blast. Essentially, you have to write 14 songs in Feb (That’s a song every two days, dummy.) Some years I’ve completely smashed it out of the park and done 23 songs, other years it’s been tough going just getting to 14, but really it’s about just running headfirst through any writer’s block you may have and not stopping until you’ve collapsed from exhaustion. Creatively, that is.

So, that’s it for the moment! I leave you with some beautiful music that is currently playing as I type this. Take a wild guess at who it is?

[1] “Galoot Up-Date” being a track off the rather controversial 1984 Frank Zappa album Thing-Fish, and itself a reworking (or update) of “The Blue Light” from 1981’s Tinsel-Town Rebellion – see?! I cannot escape seeing links. I am basically John Nash. It’s only a matter of time before I am portrayed by Russell Crowe in a major motion picture.