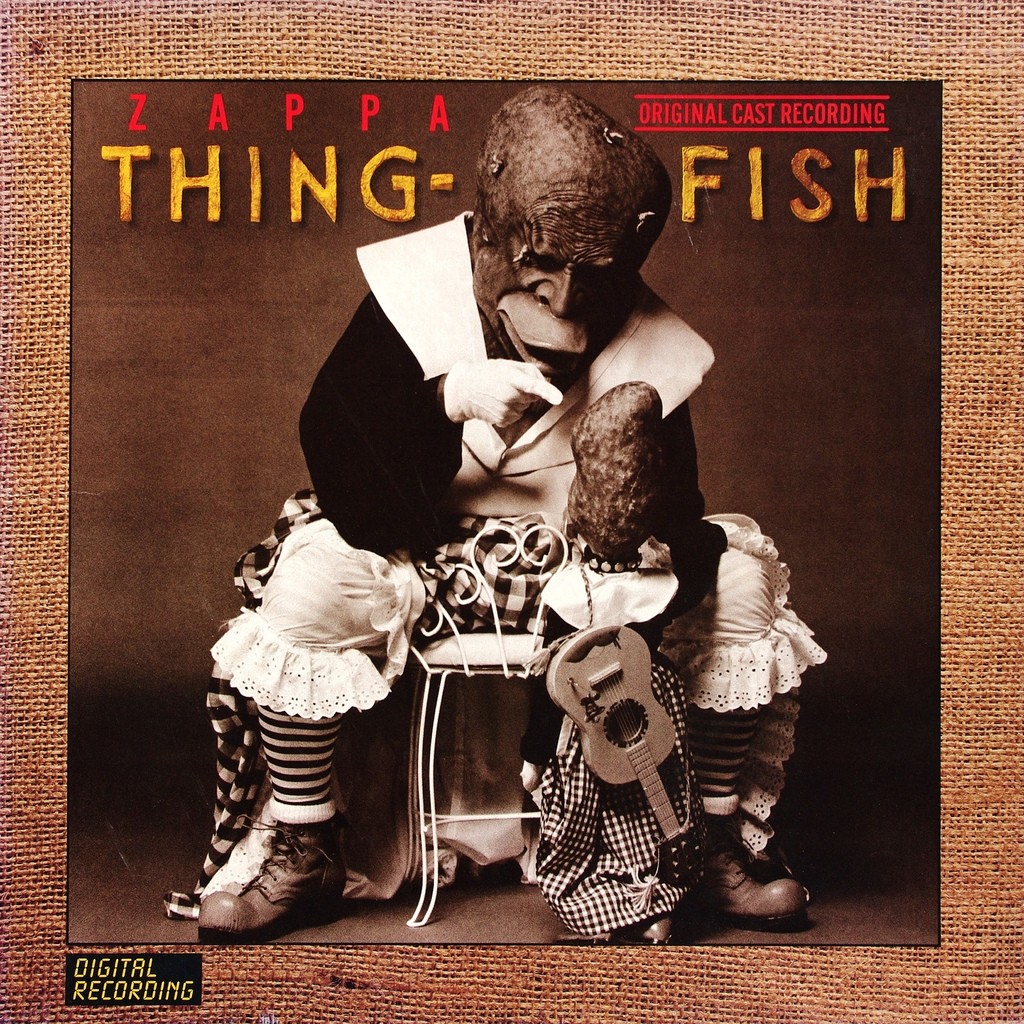 A somewhat in-depth analysis of Frank Zappa’s “The Evil Prince” from the 1984 album Thing-Fish.

Something special happens early on in Frank Zappa’s 1984 broadway-inspired album Thing-Fish. The tale of the album itself is an odd one and I…really do not know where to start explaining it. Wikipedia does a reasonable job of preparing the listener:

“The album’s storyline is inspired by Broadway theatre, AIDS, eugenics, conspiracy theories, feminism, homosexuality and African American culture. It involves an evil, racist prince/theater critic who creates a disease intended to eradicate African Americans and homosexuals. The disease is tested on prisoners who are turned into “Mammy Nuns” led by the story’s narrator, Thing-Fish. The story within a story is a satire of a White Anglo-Saxon Protestant couple, Harry and Rhonda (actually played by Italian-Americans), who attend a play performed by the “Mammy Nuns”, and find themselves confronted with their pasts: Harry presented as a homosexual boy, Rhonda presented as a sex doll brought to life.”

This cryptic plot is told amidst re-recordings of older material from Zoot Allures, Tinseltown Rebellion, You Are What You Is and Ship Arriving Too Late To Save A Drowning Witch, with new lyrics and – in some instances – new music. It is this reinvention that brings us to the aforementioned special moment.

“The ‘Torchum’ Never Stops” is a rendition of “The Torture Never Stops” from Zoot Allures, originally released 8 years earlier. 4 minutes into this new version of the piece, instead of the guitar solo listeners are expecting, we have a… monologue from the antagonist of the album, The Evil Prince.

If anything is to be understood about this album, it’s in The Evil Prince’s monologue. There’s a passion, a fire in Napoleon Murphy Brock‘s delivery that sets it apart from most of Zappa’s music. It’s scathing, satirical and emotive. The stand-out nature of this section lead to it being singled out by Zappa when touring in 1984. The piece was entirely rearranged and was christened a new title, “The Evil Prince”. For the most part, I will be looking at the original piece as I have a slight preference for Napoleon’s delivery, but the live rearrangement is not to be missed.

A quick look over of the lyrics reveals the standard Zappa philosophies: Blandness is to be reviled. Censorship is evil. AIDS was a government conspiracy.

OK, so the last point is a little out-of-left-field. But one Zappa appears to have held fervently, as it appears 4 years later in the track “Promiscuous” off Broadway The Hard Way. In this monologue, it’s revealed that our antagonist The Evil Prince is killing “creative” people – keep in mind that “fairies and faggots and queers are “creative””. I’ll let Frank take it from here: “The simple thought behind Thing-Fish is that somebody manufactured a disease called AIDS and they tested it [on people].  …So we take it one step further and they’re concoting the special disease which is genetically specific to get rid of ‘all highly rhythmic individuals and sissy boys.’“ (Seriously, the wiki article was surprisingly helpful – I usually expect very little!)

This order to kill has come from on high, via a “Beige-Blandish God” – the phrase itself a nice little jab at religion (and by Zappa’s standards, a rather subtle one). So this discriminatory disease has been authorised by God, and is being executed by government agent in the form of The Evil Prince. Analogues to bible-bashing politicians are not very far away, even if we keep the conspiracy stuff to the side.

The latter stanzas focus on the death of Broadway and are an attack on theatre critics akin to “Packard Goose” from Joe’s Garage. In that tune however, the music is somewhat cheerful. It matches the lyrics; you can tell Zappa is relishing in telling journalists to fuck off because he just doesn’t give a shit – “take a squat on the cosmic utensil” (ouch). With The Evil Prince’s monologue, the music is a lot more sinister and the vocals carry an intensity:

“I’ll say it’s disgusting, atrocious, and dull
I’ll say it makes boils inside of your skull”

Five years after “Packard Goose”, Zappa really lets loose. “The Evil Prince” attacks critics with their want to hark back to the ‘good old days’ of Broadway. Cue Zappa’s response: well, isn’t that when everyone on stage was in blackface, speaking in ludicrous and racist voices?

Nearing the end, Zappa simultaneously manages to be satiric and sincere with the theatre critic’s final statements. Whilst The Evil Prince as the critic laments the abundance of creativity he is viewing on stage, Zappa himself is lamenting the exact opposite. What did happen to Broadway? A live version of the song played by Zappa Plays Zappa reveals that a lot of Thing-Fish came after a viewing of Sir Andrew Lloyd Webber’s Cats by Frank, Dweezil and Moon. Where is the heart and the soul?

“The Evil Prince” attacks critics, but it does so much more. It attacks religion and the government, albeit through a rather controversial take on AIDS. But what is most important to me is that it attacks censorship under the guise of blandness. Throughout all the music, film, TV and books I have digested over the years of my existence, I have never found someone who despises boredom more than Zappa. To be boring is to conform, and to conform is to censor yourself. How far along that line of censorship you go will change from person to person, but Thing-Fish’s tale of minstrel-speak and explicit sex acts with sex dolls, fountain pens and briefcases (yeah…that happens) is attacking censorship. And all this happening in mid-1980s America. This album is begging for white-picketed fenced Americans to be offended. But more importantly, it is begging to be allowed to offend.

This is all just scratching the surface though. I might understand the piece at an emotional level – such is the effectiveness of Napoleon’s delivery – but its exact meaning escapes me. But I know it’s there. Somewhere, over there. I can tell.

THE  EVIL PRINCE:
Somewhere, over there, I can tell,
There’s a voice of a potato-headed whatchamacallit
Who does not wish me well!
His clothes are quite stupid, and also his shoes!
He’s got a big ol’ duck-mouth who knows how he chews!

He thinks he knows something about the Great Plan!
How Ultimate Blandness must rule and command
He knows not a drop, not a crumb, not a whit,
Of the reason for doing this criminal shit
And then, if he did, would it matter a bit?
Not at all! Because it is writ,
Our Beige-Blandish God tends to certify it:

“Only the boring and bland shall survive!
Only the lamest of lameness will thrive!
Take it or leave it, you won’t be alive,
If you are overtly creative!”

Fairies and faggots and queers are “creative”
All the best music on Broadway is “native”
Who will step forward and end all this trouble?
For beige-blandish citizens, clutching the rubble
Of vanishing dreams, of wimpish amusement,
Replaced by a rash of “creative” confusement!

The spying potato with horrible diction
Will rot in the garbage when this show’s eviction
Takes place shortly after my alternate skill
Of theatrical sabotage triumphs your will!
I’ve a special review, I’ve been saving for years
For a show just like this, with potatoes and queers

Hold on to that dollar a little while longer
For spending it here, why, it couldn’t be wronger!
What’s happened to Broadway?
Where’s it gone, all the glitter?
The Heart and the Soul?
The patter, the pitter?

And after this deadly review hits the paper,
In will come “Roper, Bender & Raper”
To legally execute all that remains
Of this tragic amusement for drug-addled brains