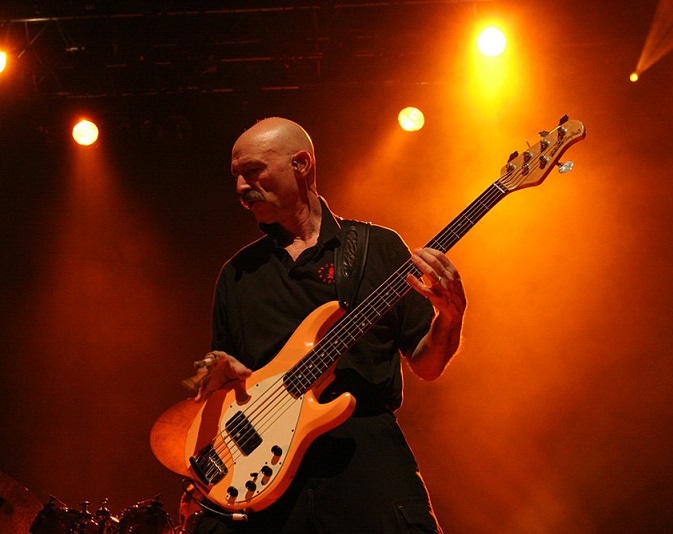 I originally interviewed Tony Levin (King Crimson, Liquid Tension Experiment, Peter Gabriel) back in September 2013 for Prog Zone Magazine. He took time off his tour with Peter Gabriel to answer a few of my questions about his latest album – a collaboration between Levin, Jordan Rudess of Dream Theater and Marco Minnemann (whom I recently interviewed), titled Levin Minnemann Rudess. It was an absolute pleasure to be able to pick the brain of one of the greatest bassists around, only to be topped a month ago when I actually met Tony and several other King Crimson members during their tour of The Crimson ProjeKct.

Prog Zone Magazine: Hi Tony, thanks for taking the time to talk. I know you’re getting ready to tour with Peter Gabriel, and this actually leads straight into my first question. How did Levin Minnemann Rudess even get written when you guys are all so busy?

Tony Levin: Hi Cam.  Yeah, we’re all pretty busy lately, but in my case there were some breaks earlier this year, and that’s what allowed settling down to get this album done. It had been an important objective for me and Scott Schorr (the producer) so we took advantage when there was time. Then we were lucky to catch Marco between tours, and he jumped on the idea and very quickly wrote a lot of cool material.  Jordan was busy during all that time, finishing up the Dream Theater album – in fact we were very short of time (to achieve the September release) by the time Jordan was free — he had to work his tail off to get his great parts on all the pieces.

PZM: Obviously you’d had some previous experience with Jordan Rudess in Liquid Tension Experiment, but what was it like to work with Marco Minnemann?

TL: We had toured together a bit, with Eddie Jobson, in UKZ, and I knew what a fantastic drummer he is. What I didn’t know is that he also plays guitar and bass very well. I found out when he started sending music ideas to me, and, yow, the guitar was good! (So was the bass, but I figured it was my job to replace that!)

What’s nice is that the musical chemistry among the three of us really worked well on the album – how it went down shrinks in importance when you feel you’ve got some special music to put out there.

PZM: Throughout the album there’s quite a balance of old school prog rock and jazz fusion, but also some more experimental material. For a brief moment in the excellently titled “Frumious Banderfunk”, we get to experience this uplifting, funky, steel drum-filled section. I feel like I’m walking down a street in Miami! Are these just the sounds that come out when you, Jordan and Marco are in a room together, or were there specific styles and areas you wanted to explore as a group?

TL: The different feels, and different sections came about in various ways. Some of the Zappa-like sections are that way because of the sounds Marco used, and the patches Jordan chose for his keyboard parts.  We played on the songs, not together but one at a time – and, like one of those stories you whisper around in a circle and it gets altered, each player was free to just take it wherever he liked… so maybe I’d play an upright bass line in 4/4 giving a jazz feel to something that Marco had written but intended to be rocking, or quiet. Jordan, especially, with all his keyboards, came up with textural things we hadn’t imagined.

So to best answer your question, we did not start out with specific styles and aims, we started with the music – first my compositions, then Marcos… and then we took turns de-constructing those pieces, making them into something new, and, hopefully, something with a flavor of each of the three players.

PZM: Are there any stand-out tracks on this record where you are particularly proud of what you have achieved?

TL: There are a lot of sections I think are great — and it’s a nice feeling to have an album come out that way. I suppose, looking at just my playing, one of my favorite moments is in the end section of Orbiter, a piece Marco wrote, where the busy stuff stops, it chills out with big fat chords, and I did a kind of Jaco tribute line on the NS Electric Cello, that seemed to close the piece perfectly. Anyway, that’s about my favorite moment for my playing.

PZM: In regards to the upcoming Peter Gabriel Back to Front tour, after playing such technical pieces on an album such as LMR, is it difficult to get back into the mindset of playing shorter, less physically challenging, music?

TL: Good question — not so much in regard to this tour, but generally switching genres does take a bit of adjusting for me. Especially with instruments – for instance, a lot of my touring lately is with the band Stick Men – where I just play the Chapman Stick. Last year there were times when I went 6 months without playing a bass. So to then start a tour, say with The Crimson ProjeKCt, where I’m playing Stick and bass, yeah, it’s a big adjustment.  Ideally I have time to practice before those switches (and that’s the case this week as I get ready for Peter’s tour.)

Playing the STYLE of the music, if it’s different than what I’ve been doing, isn’t very hard. I just listen to the music that’s being played, and do my best to find the best bass parts for it. Whatever I’d played before doesn’t matter.

PZM: I’d like to briefly touch on David Bowie’s latest album, The Next Day, on which you played bass on several tracks. I particularly enjoyed your work on “If You Can See Me”, which seemed very King Crimson-y to me in its dissonance. Given the secrecy surrounding that album, how did it come around for you to play on that record, and how hard was it to keep under wraps?

TL: I was pretty thrilled to get the call to play on the album – at that time they weren’t sure it was going to be a released album, or where it’d go. And I knew I was not the main bassist on it — Gail Ann Dorsey has been playing great bass with David for some time — and she was busy for a week of the recording period, hence they asked me to fill in.

The tracks were great fun to play to. I played to almost all of them, though I’m only on a few of the final versions. And David was playing and singing great.

Keeping it a secret wasn’t hard, except in one case… I was to be in a wedding party, as best man, on the weekend of the week’s recording I was asked to do. Didn’t want to miss out on the album, didn’t want to miss the wedding, so I compromised and bowed out of the wedding party prep on the Saturday, and bowed out of the recording on the Sunday so I could be at the wedding … but it was awkward because my friend, the groom, is a big Bowie fan, and I couldn’t tell him, for a YEAR, that the reason I couldn’t make the rehearsal was to do that album.  Pretty funny, looking back.


PZM: You and Bill Bruford shared quite a special musical relationship – starting in King Crimson, both departing after THRAK and the many, many ProjeKcts, before continuing on bands such as Anderson Wakeman Bruford Howe and B.L.U.E. (Bruford Levin Upper Extremities). Do you still keep in touch now that Bill has retired from drumming?

TL: I do occasionally talk to Bill, and he’s a good friend of mine. He’s the first player I’ve played with who’s officially retired from playing – it was pretty strange for me when he announced it, because he’s such a great player.  Later, I found he’s written a book, done some book touring, and acedemia touring, so he’s keeping very busy in creative fields. Still, of course, I do miss playing with Bill.

PZM: So there’s this new album, there’s Stick Men, the Crimson ProjeKct, Peter Gabriel…if Robert Fripp ever gets King Crimson back together, there’s that too. Phew! Are there any plans of coming to Australia any time soon in any of your many, many incarnations?

TL: Yeah, there’s all that and more.  Keeping in mind that lots of Rock plans don’t come through, and I can’t discuss tours til they’re confirmed, I’d say there’s a very good chance that I’ll get to Australia this coming year with some special music — maybe more than once!

PZM: That’s already a pretty full roster, but are there any further upcoming projects? Or are you finally taking a well-earned holiday?

TL: No holiday – playing isn’t really work, it’s inspiring.  What’s coming is, as I said, hard to predict until it’s confirmed. My hope is that most of the tours proposed for 2014 come through, and as each is confirmed, I’ll post on FB or the web site, and ideally have a really busy year doing what I love to do: play good music.

PZM: Thanks again for talking and have fun on the upcoming tour!