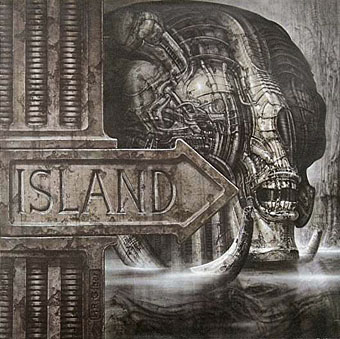 Island were a four-piece avant-garde progressive rock group from Switzerland. They released their debut album Pictures in 1977 and vanished into obscurity, which is an absolute shame, as the album is a relatively unknown classic of the progressive rock area.

One of the key elements that makes Island sound so different right out of the gate is their choice of instrumentation. There is no guitar or bass – the latter role is fulfilled by bass-pedals. Instead, the focus is on percussion, keyboards, vocals and wind instruments (sax, flute and clarinet). That sounds crowded, but there is still a lot of space on the album. Each instrument sounds isolated by itself – on its own island, if you will – yet stills gels with the rest of the band. Over the course of the album’s five tracks, the dark, lonely atmosphere is palpable, conjuring up images of an alien landscape.

In fact, it’s one of the more perfect uses of H.R. Giger for an album cover. The music shifts between worlds, morphing from progressive rock to zeuhl to chamber music to jazz to combining it all together and making the beautiful, yet freakish monster that is this album. This is the music Xenomorphs would create.

“Introduction” certainly does a good job of giving the album’s feel. The track begins with monkish chanting before the clarinet takes over, providing an eerie, yet wistful atmosphere. Whispering vocals creep in, building towards a frenzy alongside the percussion for the pure aural chaos that is the finale. Its one and a half minute duration perfectly encapsulates the creepiness and hints at the prog that we’re about to be treated to over the course of the album.

The 16-minute title track “Pictures” is my personal favourite, running the gamut of all the genres mentioned above, culminating in a truly fascinating, multifarious piece of music. Of particular note are the vocal lines that intertwine and reach beyond Gentle Giant-levels of complexity, as well as a great saxophone solo.

The first 4 minutes of “Herold And King (Dloreh)” are deceptively simple. Brooding, beautiful piano plays before the track erupts, only to implode back in upon itself for some incomprehensible, a cappella craziness, leading to the single greatest non sequitur ever shouted in music:

‘HE ILLUMINATES THE SENATE!’

So it’s not to say the band doesn’t have a sense of humour; I’m not sure I can ever hear the line ‘Gastric! Juices!’ without chuckling.

It’s not an album you can necessarily expect to fully appreciate on the first few listens. These are pieces that reward multiple listens, and the complexity of some of these pieces cannot be understated.

The CD version ends with a 23 minute bonus track titled “Empty Bottles”, which is very different from the rest of Pictures. It’s more in line with the Canterbury scene or jazz fusion, and just shows how capable these musicians were of playing any style of music. It’s a great piece, exploring many different jams, the peak being halfway through the track where we are treated to a surprisingly catchy and uplifting section. It’s very different to what came before, but not unwelcome.

These are some very good musicians playing some very challenging music that defies any single genre. Fans of Univers Zero who want something a little more prog should definitely check this out. 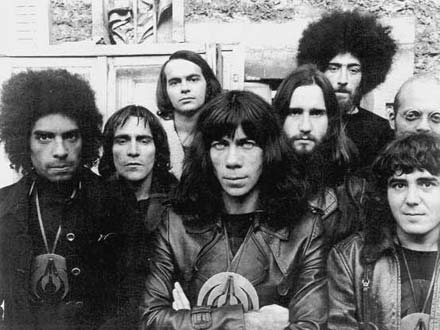