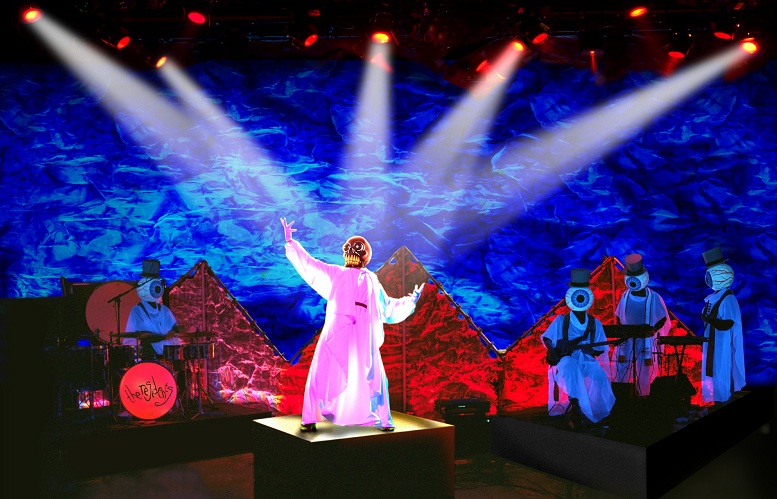 I say all of this, as I find most other reviews from the period dismiss the music a little too easily. As if that was all that was intended to be heard, when really what is being reviewed is only a portion of the work. Given The Residents are a band first and foremost, I don’t know how far that defence can really go, but I still think it should at least be acknowledged before looking at these albums. 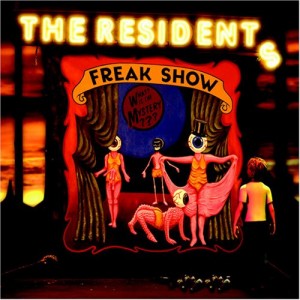 I chose Freak Show to look at from this period, as it manages to act perfectly well as a stand-alone album by itself. The album’s concept is again, best uttered by The Residents themselves:

‘Everyone comes to the Freak Show, But nobody laughs when they leave.’

Nearly every track on the album looks at a specific ‘freak’ working in a travelling freak show and attempts to humanise them; giving characters like “Herman, the Human Mole”, “Wanda, The Worm Woman” and “Harry the Head” a backstory and exploring how they deal with their physical and mental differences. The album comes to a head (pun intended) in the penultimate track which focuses on a sole audience member: “Lillie”. “Lillie” is shown to be the worst, least human person out of all the characters we’ve met, a ringing indictment of people who actually go to these freak shows for enjoyment. There are also graphic novels depicting each character’s journey as well (made more interactive and set to the music on the CD-ROM) which help put a face to the stories being told.

The music itself is just…odd in places. As mentioned above, it’s entirely composed in MIDI. There’s certainly a circus influence to most of the music which fits the theme, but in some places the music is purely rhythmic. This would work if the MIDI devices used gave any interesting textures, but they don’t. There are some great vocals from both The Singing Resident and the guest female vocalists, but most of the time even they cannot win out against the corniness of some of those MIDI pads. It’s not all bad, however. The vitriol of “Lillie” certainly elevates the track to another level, and from 3 minutes in there is some genuinely great work. The songs that bookend the album are also great, featuring some cryptic poetry and evocative imagery.

It may not come as much of a surprise to hear that I’ve had several phases surrounding this album. I have considered it as throwaway, I’ve absolutely loved the concept and album and currently, I’m somewhere in between. It certainly seems to divide fans as well – depending on who you talk to, it’s one of The Residents best or one of their worst albums. The division of this album really is about how much you can appreciate concept over the musical execution. Or, perhaps somewhere there are people who really dig cheesy MIDI. I can certainly agree with the lyric quoted above; nobody laughs when they finish the album, but whether that’s because they were bored or enraptured will depend on the listener.

Wormwood: Curious Stories of the Bible – 1998 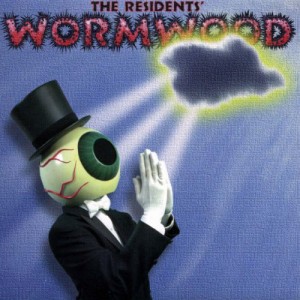 Yep, The Residents tackle the Bible. Wormwood: Curious Stories of the Bible focuses on the more overlooked sections of the Bible and, in a manner similar to Freak Show, attempts to “humanise” the text as a whole. Your casual, run-of-the-mill, not-actually-Bible-reading-unless-you-count-when-the-priest-does-it Judeo-Christian religious person may not be aware of these stories, and this really is the album’s point; to point out the darker, surprisingly twisted underbelly of one of the most important texts in history. Not in an attempt to denigrate it, but rather to provide a better understanding of this book that is so revered. “Judas Saves” has the infamous villain seeing himself as a necessary evil (he needs to betray Jesus in order for the world to be saved), while “Bridegroom of the Blood” tells a really weird tale about Moses being attacked by God, only to be saved by circumcising his baby. All of Wormwood is jam-packed similarly, with many other tales of murder, sex and general debauchery.

Musically, this is certainly a step up from the earlier 90s material. The MIDI textures are a lot fuller, and there’s some more interesting instrumentation making it a lot nicer on the ears. “God’s Magic Finger” has a really catchy synth line, “Hanging by His Hair” incorporates some actual guitar (*gasp*!) and there’s an almost gamelan influence to some of the percussion which will become a key focus on future records, 2005’s Animal Lover in particular.

We also have a greater variety of vocalists on this album. Unfortunately, the younger male vocalist just really grates on my nerves (it’s hard to find who is who on this album – he’s either credited as ‘The Mystery Dude’, or Wayne Doba) and I find it a relief to hear a song where The Singing Resident takes over. It’s not all bad however, as Molly Harvey makes her first appearance here. She truly is an excellent singer and will become a huge part of The Residents work from now on, although doesn’t sing on too many tracks here.

Given the epic scope of the source material, Wormwood does seem to bite off more than it can chew over its 63 minutes. The album occasionally falls prey to the dull MIDI monotony that drowned Freak Show, so even if the stories the songs explore are always interesting, there still are a few throwaway tracks. “Bridegroom of the Blood” certainly falls under that category for me – hey, do you know what I don’t want to listen to? Loops of a baby crying.

Wormwood really is a transitional album. There is a fantastic concept that even just thinking about, gets me excited (I’m weird) and there are some great tracks, but it still clings to the clunky instrumentation of all of The Residents albums from the 90s. Luckily, this improvement in sound will only continue through the 2000s.

In this vein: There’s the live album for the tour, Roadworms, as well as video footage of The Wormwood show, featuring a lot of glow-in-the-dark paint. If you’re a fan of the album I highly recommend checking out either of these. 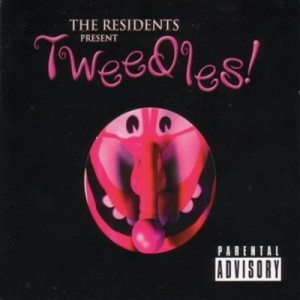 Imagine if all of Pink Floyd’s The Wall followed the story of “Young Lust”. Isolation, manipulative mothers and a yearning to break free are all present here in Tweedles!, but this is also the story of a sex addict.

Tweedles (our narrator, voiced by The Singing Resident) detaches from himself and society, to the point of finding no meaning beyond that of sexual gratification. He shames himself for having romantic yearnings, drinking himself into oblivion to quell his feelings, and yet these feelings are what he is so desperately searching for.

The music itself is some of the best of The Residents; the Film Orchestra of Bucharest providing an atmospheric backdrop for the narrator’s monologues and Nolan Cook’s guitar work is exceptional, providing an atonal edge to the proceedings. However for the most part the music is electronic, comprised of drum machines, samples and looping bass. This level of variety is a big step up for the band musically and it’s very refreshing to put this album on after all that MIDI.

Tracks like “Elevation” and “Mark of the Male” (a pun on Mark of the Mole) revel in a hyper-masculine sexuality and fully embrace the coldness the electronic blips and harsh distorted guitar the music provides. But when the cracks begin to show, as in the penultimate and most revealing track of the album “Shame On Me”, we’re presented to some heart-achingly melodious keys and backing vocals. Tweedles is also an excellent character; crude and sometimes a little too-on-the-nose, but his complete denial of what he wants until the album nears its end provides for an interesting character study. We are treading some very similar territory to that of God in Three Persons in some places, yet Tweedles! manages to obtain uniqueness – quite possibility due to the more reactive and engaging music on this album.

There are a few non-essential tracks on here (the album is 61 minutes long) and could do with some trimming – in particular, the rather anti-climactic ending of the album, “Susie Smiles”. However, this is one of the most musically engaging and interesting albums in their discography, and when it does work, it works very well.

By this point, I’ve probably talked more about The Residents than most people would want. But there is certainly still more to look at!